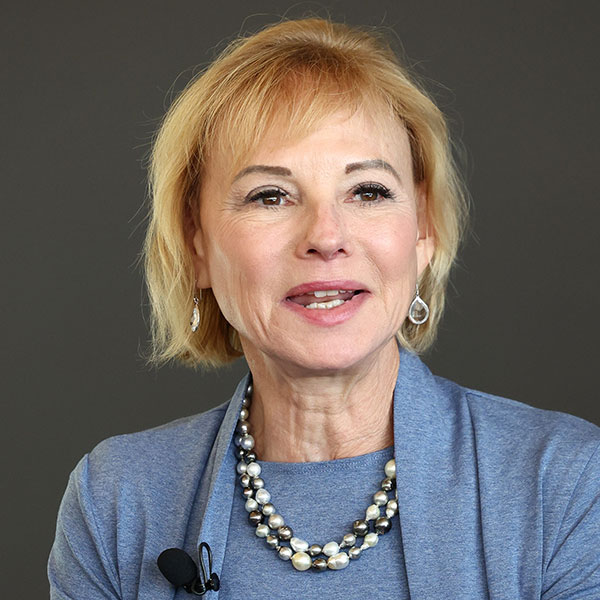 Sherri Goodman serves as Vice-Chair of the US Secretary of State’s International Security Advisory Board (ISAB). She is also the Secretary General of the International Military Council on Climate & Security (IMCCS), representing over 40 military and national security organizations addressing the security risks of a changing climate. She is credited with educating a generation of U.S. military and government officials about the nexus between climate change and national security, using her famous coinage, “threat multiplier,” to fundamentally reshape the national discourse on the topic.

She is a Senior Fellow at the Woodrow Wilson International Center’s Polar Institute and Environmental Change & Security Program, as well as a Senior Strategist at the Center for Climate & Security.

Sherri chairs the Board of the Council on Strategic Risks and chairs the External Advisory Board on Energy and Homeland Security for Sandia National Laboratories. She is the Vice-Chair of the Board of the University Corporation for Atmospheric Research (UCAR).  She serves on the Climate Council of the US EXIM Bank and on the National Academies’ Advisory Board of the US Global Change Research Program. Sherri is a Board Director of the Atlantic Council and a Life Member of the Council on Foreign Relations.

Sherri is the former President and CEO of the Consortium for Ocean Leadership. She served as Senior Vice President and General Counsel of CNA (US Center for Naval Analyses). She is the founder and Executive Director of the CNA Military Advisory Board, whose landmark reports include National Security and the Threat of Climate Change (2007), National Security and the Accelerating Risks of Climate Change (2014), and Advanced Energy and US National Security (2017) and The Role of Water Stress in Instability and Conflict (2017) among others. The film "The Age of Consequences" in which Sherri is featured, is based on the work of the CNA Military Advisory Board.

Sherri served as the first Deputy Undersecretary of Defense (Environmental Security), (1993-2001), where she was responsible for environmental, energy, safety and occupational health for the US Department of Defense. Sherri established the first environmental, safety and health performance metrics for the Department, and led its energy, environmental and natural resource conservation programs. Overseeing the President’s plan for revitalizing base closure communities, she ensured that 80% of base closure property became available for transfer and reuse. She led the Secretary’s Arctic Military Environmental Cooperation program which developed a container for storage of spent nuclear fuel for liquid waste from Russian nuclear submarines.

Sherri served on the staff of the Senate Armed Services Committee where she was responsible for oversight of the Department of Energy’s nuclear weapons complex, including research and development of nuclear materials and national labs, and environmental cleanup and management.  She has practiced law at Goodwin Procter, as both a litigator and environmental attorney, and has worked at RAND and SAIC.

Sherri has received numerous honors and awards, including an Honorary Doctorate from Amherst College in 2018, the Department of Defense Distinguished Service Award in 1998 and 2001, the Gold Medal Award from the National Defense Industrial Organization in 1996, and the Environmental Protection Agency’s Climate Change Award in 2000.

Sherri has written a book, The Neutron Bomb Controversy:  A Case Study in Alliance Politics, and authored dozens of reports and articles on a broad range of climate, energy, environmental and national security matters. She is a frequent presenter and lecturer to governments, private and public sector organizations, and academia.  In recent years she has spoken at Harvard Kennedy School, MIT, Princeton, Yale, Stanford, University of Chicago, University of Pennsylvania, Middlebury College, Norwich University, University of Idaho, University of Arizona, Virginia Tech, and Georgetown University. She has been an Adjunct Lecturer in International Affairs and Security at the Harvard Kennedy School and an Adjunct Research Fellow at the Kennedy School’s Belfer Center for Science and International Affairs.

A graduate of Amherst College, she has degrees from Harvard Law School and Harvard Kennedy School.