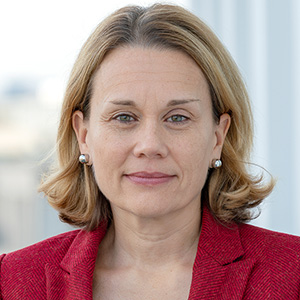 Julianne “Julie” Smith is an American policymaker with specific expertise in Europe and transatlantic relations. From 2014 – 2018, she served as the Director of the Transatlantic Security Program at the Center for a New American Security (CNAS). There, in addition to her research, she launched “Across the Pond, in the Field,” a project that brought small groups of American and European policymakers to cities across the United States to talk about U.S. foreign policy with new audiences.

Prior to joining CNAS, Julie served in the Obama administration. From 2012-2013, she served as the Deputy National Security Advisor and during March and April of 2013 as the Acting National Security Advisor to Vice President Joseph Biden. Before the White House, she served as the Principal Director for European and NATO Policy in the Office of the Secretary of Defense in the Pentagon for three years. In that capacity, Smith acted as the principal advisor to the Assistant Secretary of Defense for International Security Affairs for all matters falling within the broad spectrum of NATO and European policy.

Before joining the Obama administration, Smith directed the Europe Program at the Center for Strategic and International Studies (CSIS). She received her B.A. from Xavier University and her M.A. from American University. She also spent a year learning German at the University of Munich. In 1996/97, she worked in Germany in both the Bundestag and the Stiftung Wissenschaft und Politik as a Robert Bosch Foundation Fellow. Smith serves on the Advisory Council of the Alliance for Security Democracy; the Board of Advisors of the Truman National Security Project; and the Board of Trustees of the American Institute for Contemporary German Studies (AICGS). She is an advisor to Beacon Global Strategies and a contributing editor to Foreign Policy, where she coedits "Shadow Government."