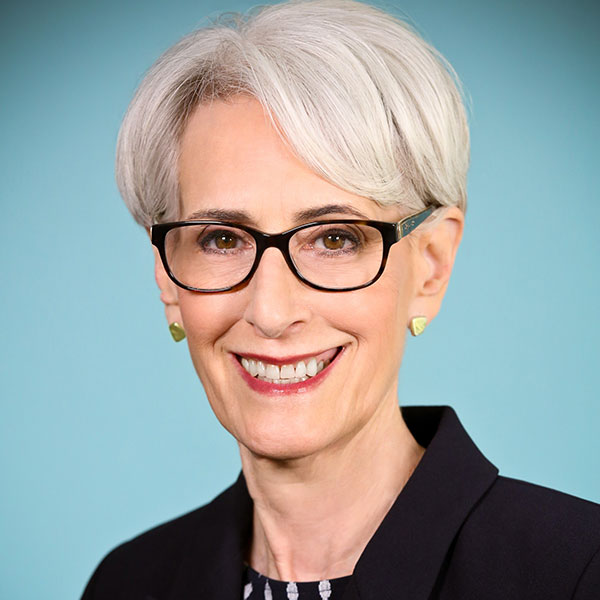 Prior to being confirmed as Deputy Secretary of State, Ms. Sherman was a professor of the practice of public leadership and director of the Center for Public Leadership at the Harvard Kennedy School. In addition, she was a Senior Fellow at the School’s Belfer Center for Science and International Affairs. Ambassador Sherman was also a Senior Advisor at Albright Stonebridge Group and former Under Secretary of State for Political Affairs.

She serves on the boards of the International Crisis Group and the Atlantic Council, and is a member of the Council on Foreign Relations, Aspen Strategy Group and American Academy of Diplomacy. Ambassador Sherman led the U.S. negotiating team that reached agreement on a Joint Comprehensive Plan of Action between the P5+1, the European Union, and Iran for which, among other diplomatic accomplishments, she was awarded the National Security Medal by President Barack Obama. Prior to her service at the Department of State, she was Vice Chair and founding partner of the Albright Stonebridge Group, Counselor of the Department of State under Secretary Madeleine Albright and Special Advisor to President Clinton and Policy Coordinator on North Korea, and Assistant Secretary for Legislative Affairs under Secretary Warren Christopher.

Early in her career, she managed Senator Barbara Mikulski’s successful campaign for the U.S. Senate and served as Director of EMILY’S list. She served on the President’s Intelligence Advisory Board, was Chair of the Board of Directors of Oxfam America and served on the U.S. Department of Defense’s Defense Policy Board and Congressional Commission on the Prevention of Weapons of Mass Destruction, Proliferation and Terrorism. Ambassador Sherman is the author of Not for the Faint of Heart: Lessons in Courage, Power and Persistence published by PublicAffairs, September 2018.