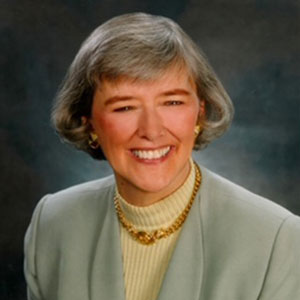 Former Congresswoman Patricia Schroeder is president and chief executive officer of the Association of American Publishers (AAP), the national trade organization of the U.S. book publishing industry. She left Congress undefeated in 1996 after serving in the House of Representatives for 24 years. Before assuming her post at AAP she spent a semester as a professor at Princeton University. Currently, she is also leading New Century/New Solutions, an out-of-the-box think tank, for the Institute for Civil Society in Newton, Massachusetts.

Born in Portland, Oregon, in 1940, Schroeder graduated in 1961 from the University of Minnesota. She went on to Harvard Law School, and was one of 15 women in a class of more than 500 men. She earned her J.D. in 1964 and moved to Denver, Colorado, with her husband James, who encouraged her to challenge an incumbent Republican for Colorado’s First Congressional District seat in 1972.

The mother of two young children at the time of her election, Schroeder went on to serve 12 terms in the House. During her tenure, she became the dean of Congressional Women, co-chaired the Congressional Caucus on Women’s Issues for ten years, and served on the House Judiciary Committee, the Post Office and Civil Service Committee, and was the first woman to serve on the House Armed Services Committee. As chair of the House Select Committee on Children, Youth, and Families from 1991-93, she saw the Family and Medical Leave Act and the National Institutes of Health Revitalization Act to fruition in 1993, a fitting legislative achievement for her lifetime of work on behalf of women’s and family issues.

Schroeder was an early supporter of legalized abortion and sponsored legislation making it a federal crime to obstruct access to abortion clinics. She was also active in military issues, expediting the National Security Committee’s vote to allow women to fly combat missions in 1991, and seeing through the passage of her Military Family Act in 1985.

A leader in educational issues and a champion of free speech, Schroeder was never a single-issue candidate. As Ranking Member of the House Judiciary Subcommittee on Courts and Intellectual Property, she was one of the most knowledgeable members of Congress on copyright issues, and a strong advocate for protecting intellectual property rights and for reinforcing the creative incentive for developing intellectual property. She continues this advocacy in her leadership of AAP.