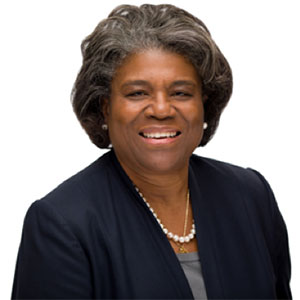 Ambassador Linda Thomas-Greenfield currently serves as the U.S. Ambassador to the United Nations.

Previously, Ambassador Thomas-Greenfield was a Senior Vice President at Albright Stonebridge Group (ASG), where she drew on her long and distinguished career as a U.S. diplomat to help the clients of ASG’s Africa practice.

She joined ASG after serving as U.S. Assistant Secretary of State for African Affairs (2013 – 2017). In this capacity, Ambassador Thomas-Greenfield led U.S. policy toward sub-Saharan Africa, with a focus on peace and security, democracy and governance, economic empowerment and investment opportunities. Prior to this appointment, she served as Director General of the Foreign Service and Director of Human Resources where she oversaw all personnel functions for the U.S. Department of State’s 70,000-strong workforce.

Previously, Ambassador Thomas-Greenfield served as U.S. Ambassador to Liberia (2008-2012) and held postings in Switzerland (at the U.S. Mission to the United Nations), Pakistan, Kenya, The Gambia, Nigeria, and Jamaica. Her Washington postings include the Bureau of African Affairs, where she served as Principal Deputy Assistant Secretary, and the Bureau of Population, Refugees and Migration, where she served as Deputy Assistant Secretary. Prior to joining the U.S. Department of State, Ambassador Thomas-Greenfield taught political science at Bucknell University in Pennsylvania.

Ambassador Thomas-Greenfield is also a Distinguished Resident Fellow in African Affairs at the Institute for the Study of Diplomacy at Georgetown University Walsh School of Foreign Service.

She is based in Washington, DC.