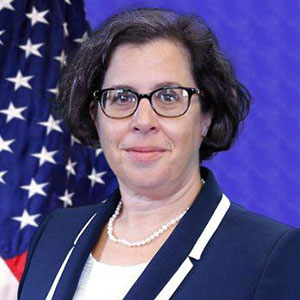 A recently retired career diplomat with the personal rank of Minister Counselor, Annie was until March 2019 the Acting Deputy Assistant Secretary for Afghanistan. From 2017-2018 she was the Deputy Chief of Mission in Kabul, one of the largest embassies in the world, during a period of both intensified violence and the beginning of a historic peace process.

Her career has focused on security, rule of law and human rights issues. She directed implementation of the Central America strategy at the National Security Council from 2014-2015, organizing multiple U.S. government agencies to resolve the drivers of uncontrolled migration. She also led the Office of Andean Affairs in the Western Hemisphere Affairs bureau during Colombia’s peace process and the Office for Peacekeeping, Sanctions and Counter-terrorism in the IO Bureau, managing a $2 billion budget and monthly briefings to Congressional committees. She was the Director of the International Narcotics and Law Enforcement program in Mexico City, Political Counselor in El Salvador, and the human rights officer in Turkey and South Africa. Her first assignment was in Colombia.

Ms. Pforzheimer was awarded the State Department’s 2001 award for human rights reporting, and has also received numerous State Department Superior and Meritorious Honor Awards. She is a graduate of Harvard University and the National War College. She speaks Spanish and some Dari, and enjoys being the parent of a nearly-graduated son, reading, classical music and hiking.